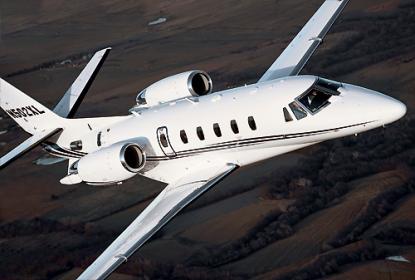 The airplane has been an industry leader ever since Cessna put a traditional midsize cabin on its high technology straight wing back in 1998. Teamed with the Pratt 545 series turbofans, the low-drag wing delivered cruise speeds well above 400 knots, exceptional climb performance, and the short runway and low speed docile handling characteristics of a straight wing.

The XLS+ cabin has 5-foot 8-inch headroom so passengers find it easy to move about. There is an enormous 90- cubic-foot baggage compartment in the tail cone, and the quality and design of Citation interiors have improved steadily to compare with any in the industry.

In other words, the XLS line has delivered more of what people want in a business airplane for the lowest cost. And the new Plus version makes the airplane better with improved engines, Pro Line 21 avionics, and a list of now standard equipment that provides more capability and comfort for about the same cost as the previous model with similar equipment.

It's going to take a true Citation expert to tell the Plus from the previous XLS model by looking at the Plus on the ramp. The only significant clue is a new, more shapely nose. The XLS, like other members of the Citation 500 family, has the sort of flattened cone nose that traces its shape back to the original Citation. The shape of the nose and radome is critical on a business jet with aft-mounted engines because ice that forms on the nose can break off and fly back into the engines. Pointy objects are good ice collectors, meaning ice will accumulate faster on a sharp cone than a more blunted surface. The issue is so potentially important that the graceful pointy beaks of the Learjet 20 and 30 series even have an anti-ice fluid flow to the radome to prevent ice accumulation.

The rather blunt shape of the earlier Citation noses handled ice well and was reasonably low in drag. But when Cessna was developing its large midsize Sovereign a few years ago it was able to design a sharper nose that was both low in drag and did not cause ice problems. When you look at the new Plus nose it doesn't jump out at you that it is different because, well, it looks just right for the shape of the forward fuselage and canopy. But when you see the new airplane beside the previous model you will immediately see what the rhinoplasty did for the airplane's looks. And the drag is a tiny bit better, too.

But in the cockpit and cabin the Plus is impressively different from the XLS. The four big flat-glass displays of the Pro Line 21 systems, and the dual FMS systems, are instantly obvious. But a closer inspection reveals that Cessna has updated the entire cockpit configuration to bring it up to current thinking in optimum human factors design.

In the center is a new pedestal with the FMS control keyboards in the front angled for easy viewing and use. The instrument sub-panel is angled for easy access by either pilot. Many of the toggle switches have been replaced by on-off buttons that show their status with "On" in light blue or "Off" in white. And system control switches have been relocated in a more logical fashion for good crew coordination and cockpit flow.

The idiot lights of the annunciator panel are gone, replaced by the Pro Line 21 crew alerting system (CAS) that uses plain language messages on the multifunction display (MFD) to alert the crew to system status or failures. Master warning or caution lights still flash to call your attention to the message, or a voice call issues a warning, but gone are the days of trying to remember what it means if a caution light comes on flashing, or did it come on steady, because they could mean different things.

The new flight guidance control panel from Collins is mounted right at the top of the glareshield, where it should be for easy selection of guidance modes, assigned altitude, heading, altimeter setting, vertical modes and so on. These are the functions that pilots use the most frequently in the busiest airspace, and in the past they were often stuck down in the aft part of the pedestal where you had to look down and hunt for them.

The Pro Line 21 autopilot system also has an automatic emergency descent mode. If, when flying above 30,000 feet, the cabin depressurizes, the autopilot will automatically start an emergency descent at maximum speed. Because there is no autothrottle the pilots need to retard the power and extend the speedbrakes for maximum descent rate, but the autopilot will automatically maximize the descent rate until it captures and holds 15,000 feet awaiting further pilot input.

The Collins integrated flight information system is also standard in the Plus. This "file server," as it is often called, allows the display of all manner of moving maps, weather and Jeppesen charts. XM Weather is also standard. Providing this information, which is now old hat in propeller airplanes, is a more difficult design issue in transport category jets because avionics hardware and software have variable certification standards. Flight critical information, dubbed Level A, must be isolated from any potential network bug or failure that could disrupt it. But the Collins file server is physically and electronically segregated from the critical information on the Primary Flight Display, for example, so it can be updated and modified without the need for lengthy testing and demonstration to prove that it can't interfere with other functions.